Since its inception, FOG has publicly addressed the issue of food justice. In 2012 we served over 5,000 hot meals to folks of all religious, socioeconomic, and ethnic backgrounds. For maximum visibility, we have strategically set up our outdoor feeding tables along the edge of a public park near the General Assistance Building, Veterans Affairs Building, and the local bus station. Our location is targeted to draw the attention of those frequenting agencies where folks can apply for government subsidies (food stamps, subsidized housing, etc.) Two large senior housing projects are within one block of our feeding tables. Over the last two years homeless encampments have been set up very close to our feeding site.

FOG’s guests struggle to put food on their table and all face socio-economic hardship. Our critical street presence in this blighted area of downtown Oakland bordering on West Oakland raises the awareness of the general public about the dire and wide-spread problem of urban hunger.

The City of Oakland continues to be in a severe housing crisis and no longer can meet the immediate and long term needs of many of its impoverished citizens. The city is in an economic boom with high tech businesses moving into downtown and expensive, trendy restaurants occupying the old mom and pop establishments. With housing and food prices rising, a larger and larger segment of our urban population lacks access to affordable, nutritious food. Low income residents are being forced out of housing. Few, if any, local fresh food shops are close by.

According to the 2010 census, Oakland had more seniors living in poverty than any other urban city in the state of California. Today California leads the country in the number of senior citizens living below the federal poverty lines (1.76 million in need). According to the latest census, 15% or 46.5 million Americans live in poverty in the ‘richest nation on earth’. In 2013 California lead the nation overall with more than 22 percent (136,826) of the nation’s homeless living in our state. 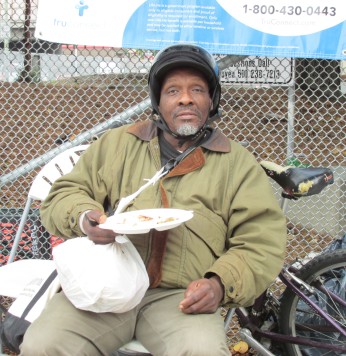 One in six Alameda County residents lack sufficient food. In a recent study by UCLA’s Center for Health Policy Research, a single senior living in a one-bedroom apartment in Alameda County needs $25,153 a year to cover the costs for housing, food, healthcare, public transportation, and other basic needs.* Because of the high cost of living in the Bay Area, a single individual’s needs exceeds the national average federal poverty line of $23,492 for a family of four.  A single individual is considered poor if their income falls below $11,490. In 2012 children under age 18 made up the highest percentage (21.8%) of those living in poverty. Access to food stamps has helped many of our residents avoid starvation. Nationally more than 80% of the 45 million Americans on food stamps had gross incomes below the poverty level. A free lunch helps folks not just meet their nutritional needs but reminds them that there is a network of friendly people out there who care for them.